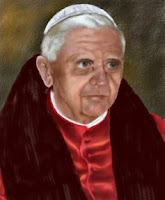 He's a neanderthal who represents the most regressive and oppressive forms of religion in the world.

He fanned the flames of Christian-Islamic hatred last year when he made some ill-informed comments about the history of Islam, condemning Islamic followers as being quick to use violence to achieve their ends.

Of course, the genocides caused by Christian/Catholic followers throughout history were somehow justified in their use of violence and oppression, it seems.

Now we see his comments about how North American Indians were "silently longing" to have their spiritual lives, their cultures and their histories wiped out by European Christian missionaries and settlers.

With a few idiotic words, this Pope has brushed aside literally 500 years of genocide and cultural and spiritual destruction.

But truth has never stopped neo-cons like Benedict from spreading their "message" to the masses. The Pope relies on ignorance and unconditional faith from his flock, whose abused children by Catholic priests the world over he regularly ignores.

If you want to see a great documentary that clearly depicts the role Pope Benedict played in covering up systemic child sexual abuse in his Church, check out the excellent 'Deliver Us From Evil' by director Amy Berg. It got nominated last year for Best Feature Documentary at the Academy Awards.

By no means does this Pope represent anything resembling the image of Christ as seen in the New Testament. That's my humble opinion having been raised a Roman Catholic here in Ontario. The Jesus I believe in, the Jesus of historical record, was nothing like this power-hungry, injustice-ignoring dinosaur.

The Pope could be playing a leading role in condemning real sin like the atrocities of never-ending war being perpetuated by governments like that of George Bush.

He could be leading a fight to end child poverty. Global climate change threatens the future of humanity and the rest of the planet, but on this issue Benedict is strangely silent.

His public comments about real social issues like poverty usually reverberate with the power of a pebble being dropped into the ocean.

The Pope could choose to be a major player in the world, but he chooses not to be. His archaic worldview keeps him quietly ensconced within his palatial residences in Rome.

Instead the Pope spends most of his time and energy attacking the weak and the historically oppressed - like North America's Indigenous Peoples, or women, or homosexuals, or anyone else who deviates from his repressive, anti-human world view.

The Roman Catholic Church continues to be a declining force, especially in the West. This is a good thing. There are a number of more thoughtful and progressive religious alternatives out there for those who want them. We don't need the Catholic Church like we did in previous centuries.

I'd like to think that soon the peoples of South and Central America will see this dinosaur for what he is: no friend of theirs.

The power of the Church and this Pope to harm humankind, as previous Popes so clearly did time and time again over the centuries, has clearly diminished in our modern age.

Despite all his attempts to win back that abusive power, I'm pleased to say that Pope Benedict will never represent any kind of moral authority to any progressive and just person again.
Posted by Matt Guerin at 12:03 PM
Email ThisBlogThis!Share to TwitterShare to FacebookShare to Pinterest

Would you care to cite any evidence that the Catholic Church engaged in forced conversions or had anything whatsoever to do with any alleged “genocide” in Latin America? Lefties make this baseless claim based on this: http://www.ushmm.org/conscience/analysis/details.php?content=2004-02-26
Insofar as the above link concerns the Church, it has the following:
“There was also a ’subtle kind of cultural genocide’ committed by the Spanish missions which abounded in Mexico, California, Louisiana and elsewhere. Lemkin notes that ‘while most of the Indians may not have been converted by actual force, it may well be assumed that they had little idea of either Christianity or the life and burdens in store for them after baptism’. Once they yielded to the admonitions of the fathers, their fate was sealed, they could no longer escape from the reach of the church, or the mission. The missionaries, for example in a church in San Francisco, gave mass in Latin and Spanish, and made no effort to learn the native tongue.”
Celebrating Mass in Latin and Spanish but not the Indians’ native tongue is “genocide”??? And this is from a far left source and, as such, is I assume the most inculpating evidence that exists against the Church. The brutality of the pre-Christian Indian cultures was, everyone agrees, horrifying — human sacrifices, brutal slavery, mass killings, etc. No wonder the Indians converted so readily when they were told of Christ. Pope Benedict was right.
Where a better case that a serious crime was committed against the native Indians is precisely where the Catholic Church did not predominate: North America. Ever wonder why still today one sees native Americans all over Latin America but not North America? It is because the Americans either killed the Indians or shunted them off to reservations. In Latin America, by contrast, the Church demanded humane treatment of the Indians as She sought to save their precious souls.

Me thinks you've seen Mel Gibson's Apocalypto too many times with lines like this: "The brutality of the pre-Christian Indian cultures was, everyone agrees, horrifying — human sacrifices, brutal slavery, mass killings, etc."

The Catholic missionary was inherently racist and a part of the greater European effort to wipe out Indigenous cultures. Your attempt to justify it by comparing it to other more brutal elements of the European invasion doesn't wash.

This is the problem: five hundred years later, the Pope still believes North America's indigenous peoples quietly longed to be "liberated" into Christ. What crap!